I am a Software Engineer from the Sacramento, California region, and originally from the San Francisco Bay Area. I've been involved with cryptocurrency since 2011.

I'm a Senior Software Engineer at the Nervos Foundation. I'm the founder of the RigidBit storage blockchain. I've written three blockchain related whitepapers. My blockchain and tech related articles have been featured in multiple publications. I've been the lead developer of Brilliant Notion since 2013.

Blockchain technology is my strongest interest and focus. Sorry, I am not available to work on your project, but that doesn't mean I don't want to hear from you. I'm always interested in connecting with like-minded individuals, discussing projects, or chatting about the possibility of future collaborations.

How I Became Involved

In 2011 spent some time working along side Bitcoin Core team to fix issues and participate in some late night IRC debates. I began mining Bitcoin and invested when Bitcoin was priced at $2.00. My intent was to hold this investment until retirement. I lost everything in the MtGox collapse of 2013.

In 2016, I became very interested in Ethereum. In 2017, I became involved in the Zcash, Horizen, and Cardano communities. In 2020, I shifted my focus to Nervos.

I began blogging on Quora about cryptocurrency and blockchain technology, quickly becoming one of the top 10 cryptocurrency writers in just a few weeks. My blockchain related articles and social media posts have received millions of views.

My blockchain and tech related articles have been featured in multiple publications. I've written three blockchain related whitepapers. I'm the founder of the RigidBit storage blockchain, and the derivative projects RigidVid, Archive3, ChainCap, and WWW2PNG.

I believe that blockchain technology has world changing potential. This technology can be summarized in a single word: "truth". This is the first technology that is insusceptible to the corrupt nature of man. This may one day radically improve the world we live.

The central banking systems of the world are completely and hopelessly corrupted. They have cheated billions of people out of trillions of dollars, and continue to fund wars for the personal gain of a small and controlling minority. This corruption occurs invisibly and silently as governments spend money recklessly without accountability. Cryptocurrency may one day defund these actions and put a stop to the endless wars with fictitious enemies.

When To Reach Out

I'm always searching for other individuals who share a genuine interest, and always open to discussing projects or chatting about the possibility of future collaborations. 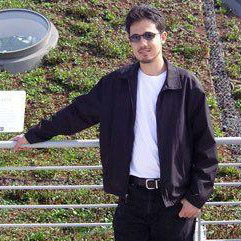 I was born in San Francisco, California. I grew up in Marin County. I lived in Oakland for a brief period. I lived and worked in San Francisco until 2012. I now live and work in the Sacramento region.

My start in development can be traced back all the way to grade school. I was a video game obsessed kid who sought a way to express creativity through software development. Once I got the hang of it, I realized I had found something that was ultimately more important and fulfilling than video games could ever be.

I am a software developer specializing in blockchain technology, mobile applications, and web applications. My career was born out of a hobby. It is what I enjoy doing. If I was to win the lottery today, I would start 10 new companies tomorrow. I have no intention of ever retiring.

I got my start in computers when a relative donated a used Apple IIe to our family. In fourth grade, I helped assemble our classroom's first computer, and I helped my teacher and classmates learn how to use it. At age 13 I began programming videogames using ZZT. At age 14 I built my first website in pure HTML and set up my first Linux web server. At age 16 I completed my first full computer program using Pascal. Also at age 16, I started my first business doing computer consultation. My hobby naturally progressed to a career in software development. I've also experimented with augmented reality, drones, and IoT.

I started investing in 2008 right before the crash and begun studying economics immediately after the crash. I listening to countless hours of economic podcasts, including many by Peter Schiff. I quickly came to the realization that everything I had been taught about economics made absolutely no sense at all. I believe that Austrian economics are imperfect, but still the best long-term strategy. I believe that Keynesian economics are unjust and non-sensical.

I started listening to Ron Paul and shortly after became a Libertarian. I believe that many of the Libertarian ideals are imperfect, but that it is the most fair and just system that works with the realities of human nature.

I keep an open mind to alternative ways of thinking because I believe that what worked in the past may not always work in the future. I do not have a solution for the impending automation crisis, nor do I believe that any current economic model will lead to a painless transition.

I've been health conscientious most of my life, but much more so in the past few years. I've eliminated 99% of conventional processed foods from my diet. I stick primarily to local, biodynamic, organic, and pesticide-free foods. I personally research all farms from where meat is purchased from.

I am an avid fan of Tony Horton's workouts. I've been using P90X3 and 22 Minute Hard Corps for years. I attempt to do some form of exercise every single day.

You cannot live a healthy life in an unhealthy environment. I vote in favor of environmental conservation whenever it makes sense. I write letters and e-mails to corporations. I donate to environmentally friendly related charities.

I would describe myself as a lifelong learner. I believe very strongly in education, regardless of where it comes from. I believe our current education system is archaic and broken. Self-motivation is the key to learning anything. The Internet has made an endless supply of information available to everyone. Those who are unwilling to take advantage of this are quickly making themselves obsolete.

I believe only in creating mutually beneficial relationships. If a relationship is detrimental for one of the parties then it must end.

I believe very strongly in being honest and forthcoming. I will give honest opinions to benefit the situation even if it is not what the other party wants to hear. In several cases, this has included my talking someone out of a bad idea where I would have benefited. 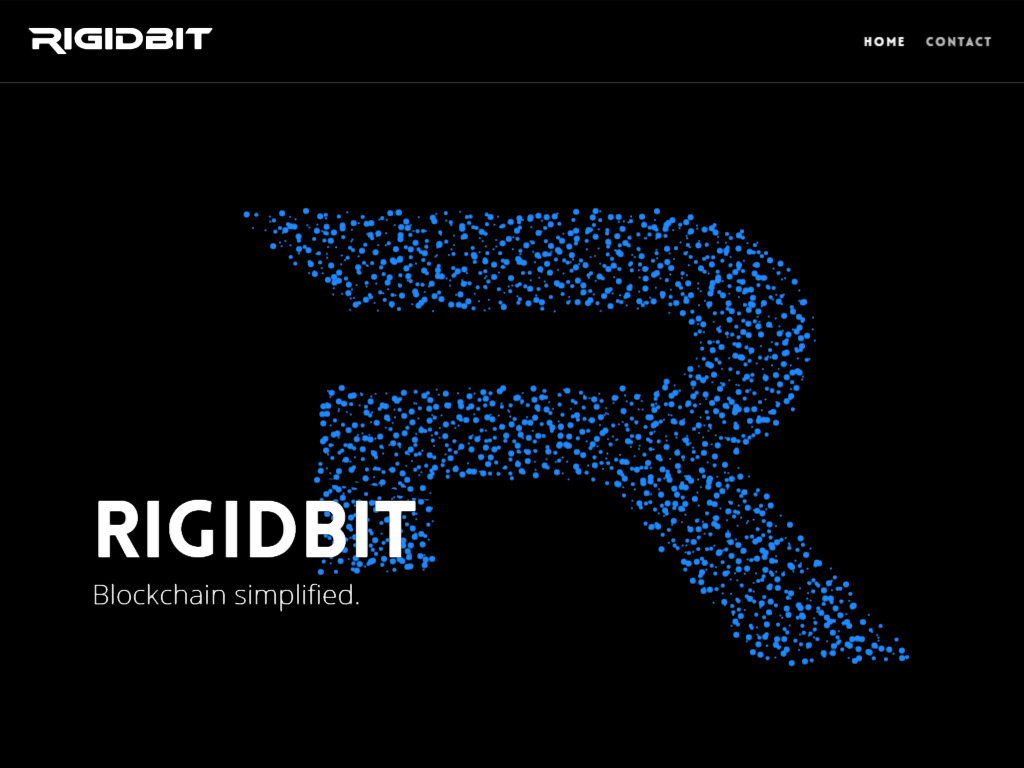 RigidBit is a self-contained storage "micro blockchain" designed for use by small to mid-size businesses and embedded devices.

RigidBit is not a fork. It is a new blockchain architecture designed specifically to address the challenges of practical usage in the real world and IoT specific use cases. 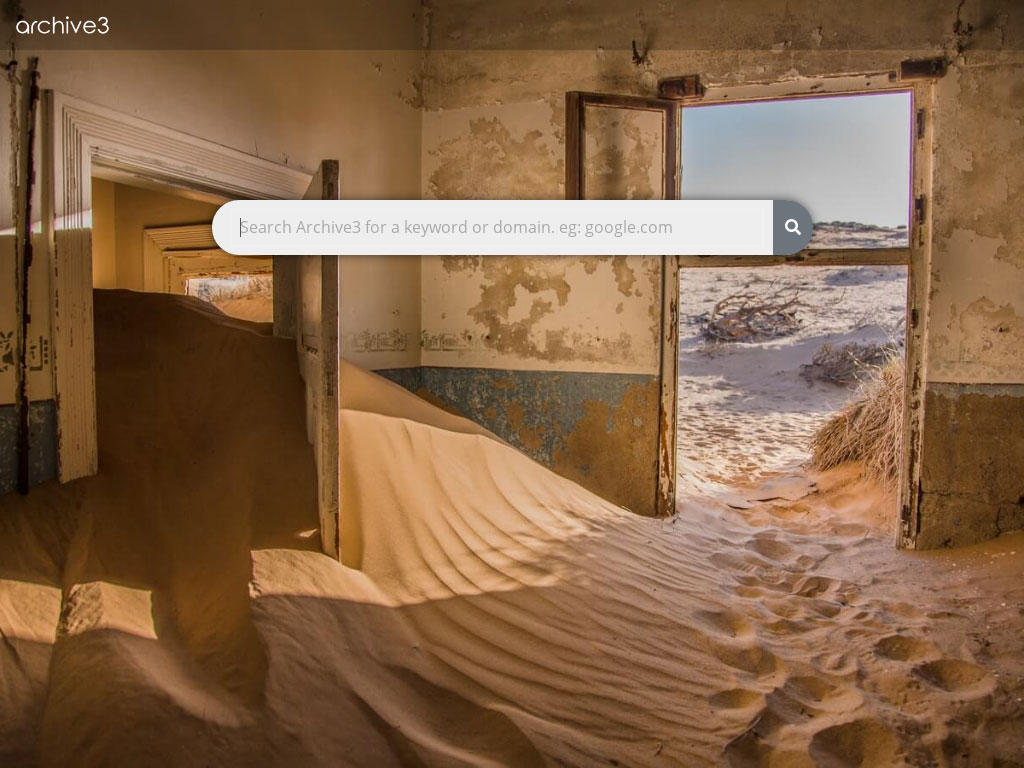 Archive3 is an internet archival service that takes screenshots of websites at intervals to show how they change over time.

Archive3 anchors all screenshots in a public blockchain so they can be proven to be unaltered since inclusion. Archive3 is built using RigidBit and Ethereum. 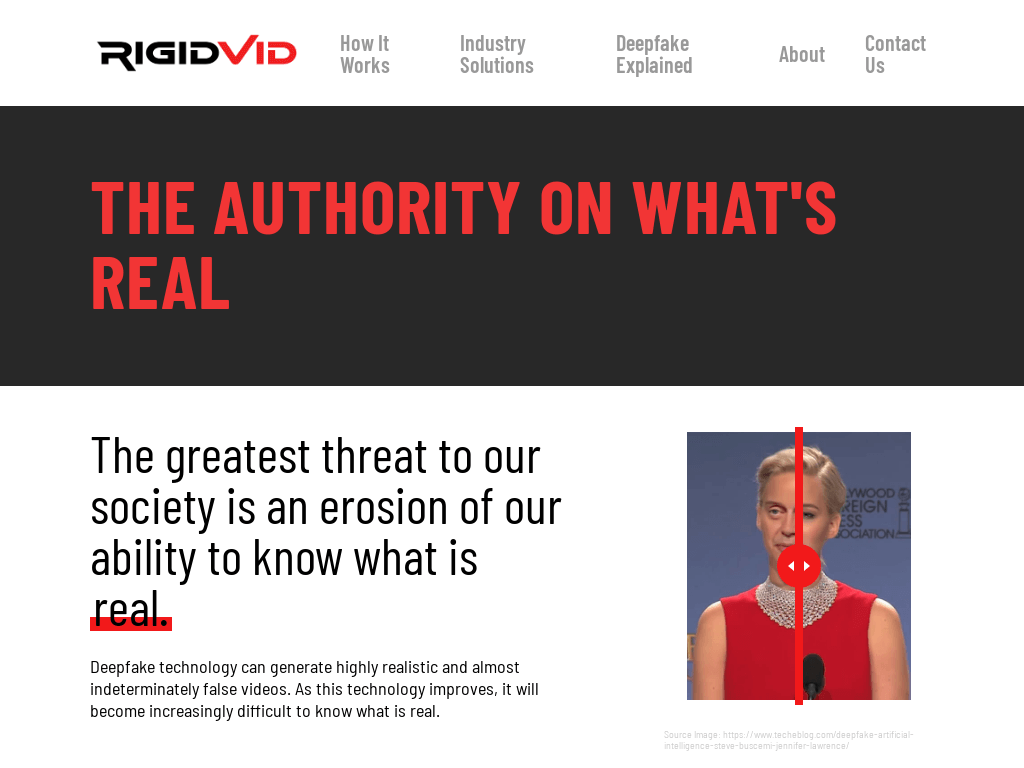 RigidVid is a video authentication platform designed to protect against malicious alteration of video content. 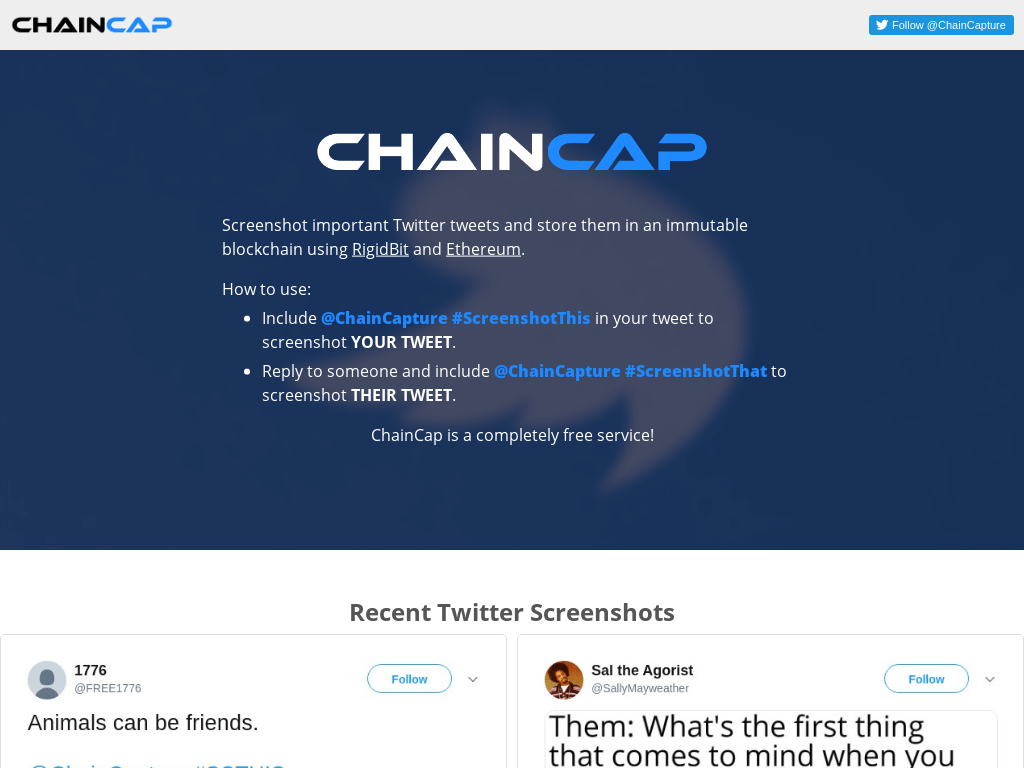 ChainCap is a Twitter screenshot archival service that anchors all screenshots in a public blockchain. 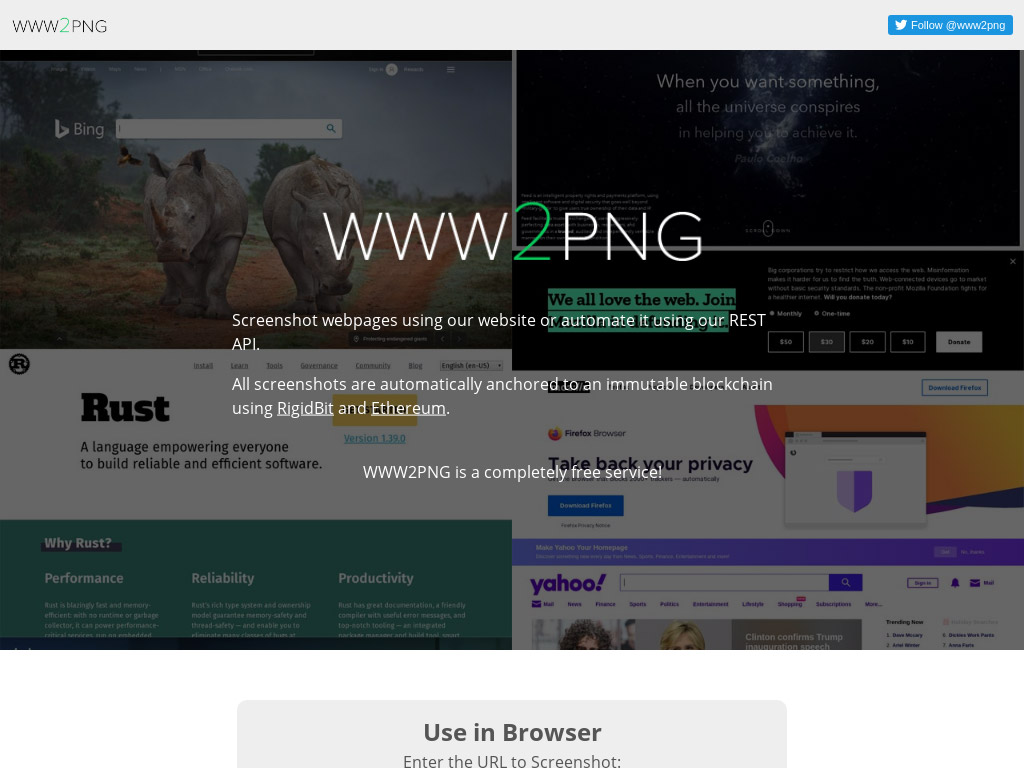 WWW2PNG is a website screenshot API service that anchors all screenshots in a public blockchain. 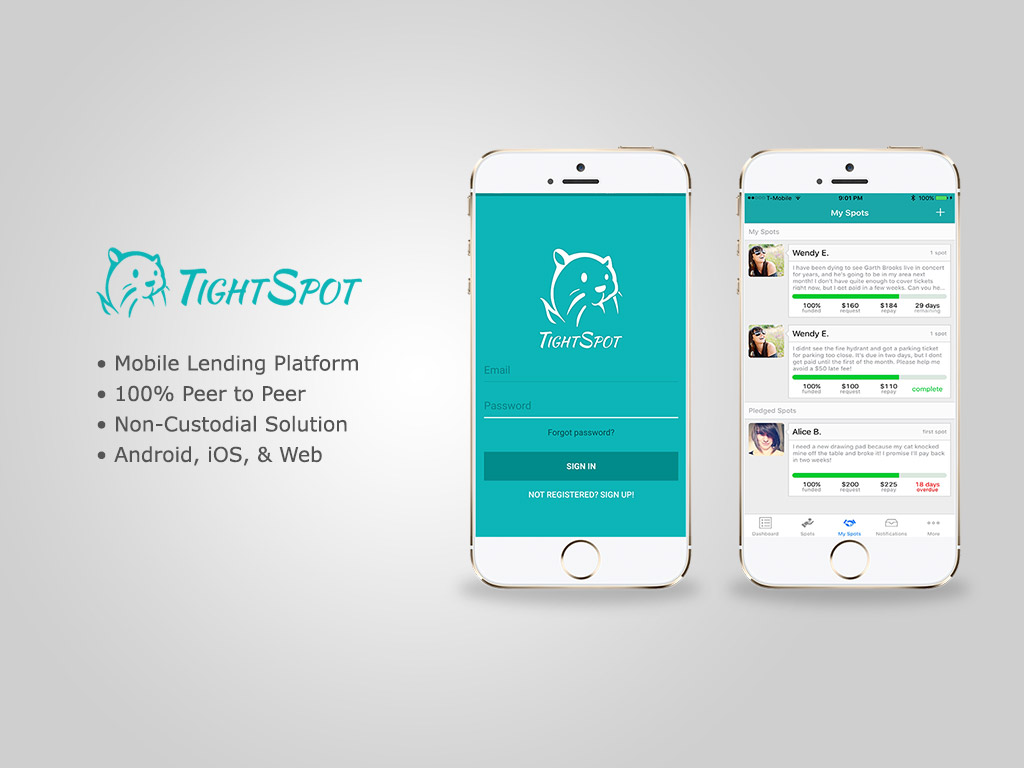 TightSpot was a mobile exclusive peer to peer micro-lending service. Loans were facilitated by voluntary lenders directly to borrowers without a third party intermediary.

Unlike other lending services, loans on TightSpot were not legally binding. Instead, TightSpot relied on public reputation to incentivize repayments. Those who failed to repay would be added to the "Wall of Shame", which was a publically available record indexed by search engines. 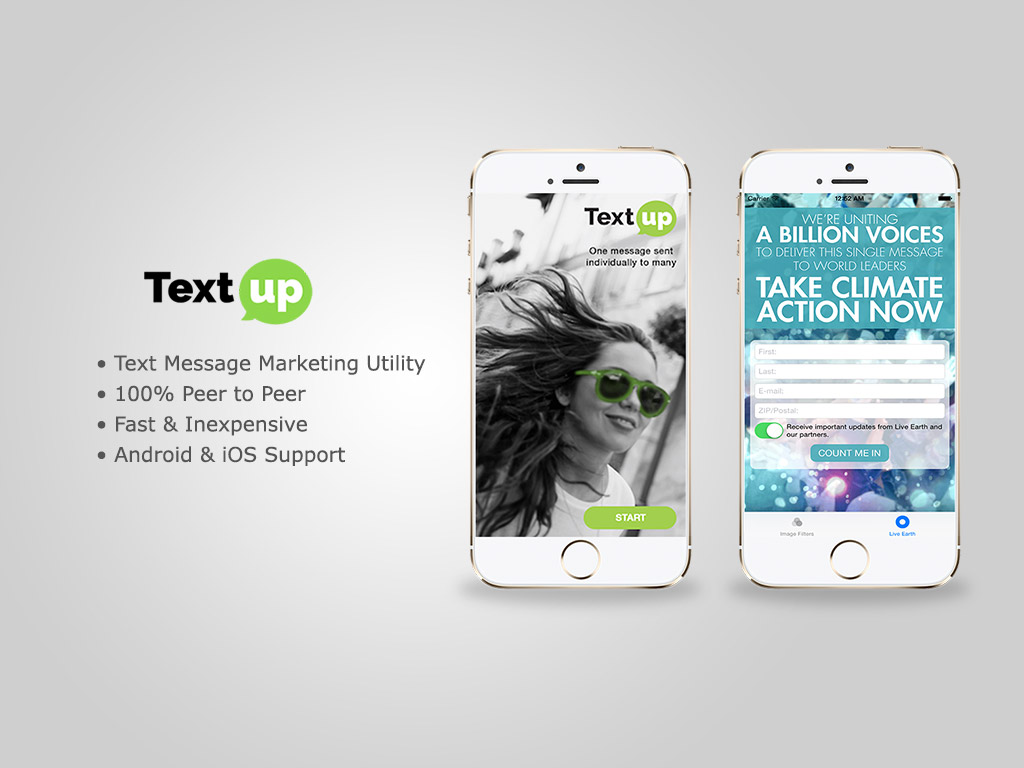 Where to Find Me 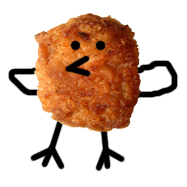 Articles I have authored have been featured in the following publications.

If you want to explore how we can work together, feel free to add me on LinkedIn. (Be sure to include a note.)

For anything else, you can reach me directly by e-mail.